“Who among us would not help, were we standing there?” –Anonymous

Though Heather and I have known each other for a very long time, we have not seen each other in years, keeping in touch via social media and the occasional email. Recently, she dropped me a note asking for advice on how to teach dog manners when being fed. At first, I thought it would be no problem, and then she explained some of the details: there were three dogs involved, two relatively calm, though one was recovering from a surgery and should not be jostled. The challenging one of the three, Satchmo, was six months old, but had never lived with people before, and had been starving when she was found and rescued. As soon as Satchmo saw the food, she would become frantic.

“Mike, HELP! I have always had dogs that were calm at feeding time. New puppy freaks out and starts jumping. I wait for her to sit before setting the food down – every single time she jumps at the crucial moment and spills the food out of my hand. Then it’s a 3 dog melee. WHAT DO I DO? This isn’t something I can deal with at 6 am after walks, waking a surly child and already running late.”

After discussing various details of her lifestyle, home layout, current health status (of the dog), etc, and talking over a couple different approaches, including puzzle feeders and variations on the method she ultimately went with, Heather decided to try this:

“Put the new dog, Satchmo, in a crate or in the bathroom for a couple minutes, while you  feed the older dogs. Feed Satcmo alone, so you can address his issue without distraction. If and only IF the new dog can be trusted to not bite, prepare its food, keep food out of reach, then feed her whole meal one bit at a time by hand, requiring the dog to be calm and to sit or remain seated for each bite. Slowly evolve that into sitting for each bite for first half, then letting dog have second half in bowl, then 3/4 in the bowl, and then all. When the new dog can handle the whole thing, and then let him eat around other dogs. There are no corrections or rebukes – Satchmo just doesn’t get fed until she sits. Let me know how it goes!” –Michael

“100% success! She got it in no time. I’ll continue feeding her in the bathroom for a few weeks before moving her back to the kitchen. YOU ARE A GENIUS! Thank you so much!” –Heather 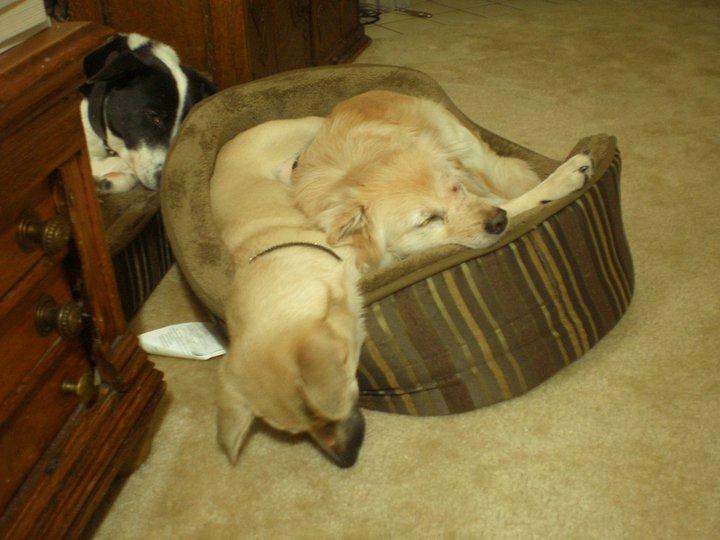 In fact, I was not sure that would work, and I am definitely not a genius, just an attentive grandson. Being in control of a dog’s food is very important; it is something my grandfather taught me when feeding his shelties. Papa always said that dogs are like people: if they can be polite at dinner, they can be polite anywhere; but if you tolerate bad table manners, then you will get bad manners everywhere.

Heather Murphy fosters dogs for Salty Dog Rescue, and specializes in nurturing the shyest of dogs, preparing them for a relatively plush life in their new forever homes. Before they can be adopted, however, these dogs must be socialized to other dogs, taught house manners, and they must learn to accept people and affection. Some of the dogs Heather works with only live with her a few days, and others a few months; all leave better for the experience. 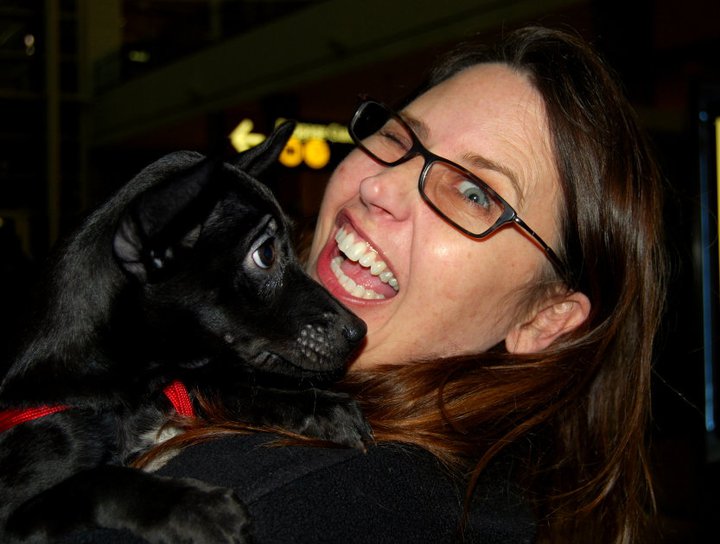 Can you describe the scene at the airport when you pick up the dogs?
The dogs come in on Eva Air – everyone gathers at the baggage claim and waits for however long it takes for the dogs and couriers to get through customs. The SDR staff and volunteers check each dog over while uncrating then hand them off to their respective fosters or new families. It can be very emotional. Some dogs come through the ordeal (2 days traveling in a crate, often paired up) very well, others not so well. The puppies are usually very happy to get out and greet their new families with wagging tails but the older dogs run the gamut. Nora didn’t exit her crate for days.

What do you do in your professional life?
I am a paralegal. I currently work in business and commercial law but have a soft spot for doing traumatic brain injury work. The brain-injured clients always get my jokes.

Does your daughter enjoy the dogs?
Fiona had a very close relationship to our last dog, Misha. I got Misha a few months before Fi was born, and the dog played nanny very well. Misha passed away in September and there hasn’t been another that has been able to fill the void for her.

What dogs do you currently have living with you?
At the moment we have Nora, a 3-year old former street dog. Mr. Waterman, 4-years old with many physical problems. He was rescued from the Taiwan ‘shelter’ system. I can’t even describe the cruelty and neglect those dogs suffer through. And Satchmo, the 4-month old pup from Taiwan who was rescued from a small seaside village where she lived in a nest in the rocks on the shore. Most of her family drowned there.

Which ones are fosters and which ones are yours forever?
Mr. Waterman is a foster; the other two are with me, now.

How did you get involved with Salty Dog Rescue?
I knew I wanted another rescue after Misha, but many organizations turned us down. I found SDR on Petfinder. I filled out and deleted the application several times because I was sure they would reject us, too. When I finally had the nerve to apply I passed their test. We signed up to take in Nora because I could tell she was painfully shy – I’m good with shy dogs. The next week SDR was having an adoption event at Immortal Dog, a pet supply store in Seattle. We were just going to buy supplies for Nora in a place that supported SDR. We ended up taking an emergency foster that day. Honey really helped Nora start coming out of her shell.

What steps do you take while fostering to get them ready for success in their forever homes?
We start out by giving the dogs lots of space. I let them decide when they are ready to be touched. These dogs are mostly street dogs. They are very wary of humans. With the abuse they’ve faced it can take some time for them to trust someone new. Then we start working on basic manners; walking on a leash or sometimes just getting accustomed to seeing a leash, sit and come. I try to get the dogs accustomed to being touched, meeting new people and not freaking out when they hear a car or bicycle during a walk. Since I’ve had Waterman for a few months we’ve worked on table manners and some tricks as well. Mostly we’ve had to get him healthy.

What is your history with pets?
My mom had dogs. They were hers and not really family pets. We always had a lot of animals in the house though; birds, rabbits, hamsters… a lot of hamsters. In my 20’s I thought a perfect life would have to include a dog and a Jeep. I got Misha, a 1 ½ year-old German Shorthair mix, at PAWS in 1999. She was the first dog that was ever mine. Each of my brothers has multiple dogs they’ve collected as strays or found on the side of the road. I like that.

What is your part, as foster, in the process for adopting?
I am just a holding place really. Once I get to know a dog, if I think I know someone who would be a good fit, I’ll try to make a connection. Usually the adoptions happen via Salty Dog Rescue and Petfinder. I also check out the new homes to be sure they are safe and suitable.

Are there any fosters that really made an impression, that you miss after they find their forever homes?
One little puppy, Liza (who was renamed Ona), really stands out. She was delightful and one of the smarted dogs I’ve ever met. She went to a family that came from Taiwan; really wonderful people who had seen firsthand what it’s like for dogs there. I miss her but I am sure she’s spoiled rotten in her new home. Waterman, of course, I will miss a lot. He has a prospective family waiting to meet him. He just had an eye removed, a hernia operation,  and underwent removal of a superfluous toe this week, so he needs to do some healing before he’s ready to meet them. (He looks so gross you’d have to already love him to look at him right now.)

Anything to add?
My reasons for working with these dogs are actually very selfish. That is the kind of world I want to live in. I can’t do much, but I can help a dog. A dog will love someone when they feel unloved by the world; a dog can make a difference.

Ooh – one glass of wine and I’m all sappy!

Published by The Dog Guy

One thought on “Who Among Us?”